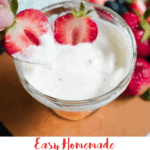 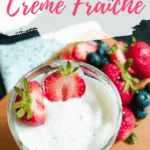 After making crème fraîche at home you’ll never want to buy it again!

Wondering What to Do with Crème Fraîche?

I’d never heard of crème fraîche until I moved to Germany as a teen. (In case you’re wondering, you pronounce it like “creme fresh.”)

That year, I lived with a German family and noticed that while they rarely ate sour cream, they did often have a small container of crème fraîche in the fridge.

I grew to love crème fraîche that year because there are so many sweet and savory ways to use it. Here are a few examples:

What Is Crème Fraîche?

Crème frâiche is a “soured cream” that originated in France but is commonly found all over Europe.

While it does have a bit of a sour tang to it, crème fraîche is more deeply flavored, richer, thicker, and smoother than sour cream. It also has a higher fat content.

One benefit of cooking with crème fraîche is that it won’t curdle at high temperatures, so it’s great to use in sauces. It’s seriously good with pasta, on pizza and in quiches, tarts, etc.

I wouldn’t use it as a topping on things like tacos, though. Sour cream is better for that.

Where Can I Buy Crème Fraîche?

I’ve bought crème fraîche but it tends to be expensive. So, I decided to learn how to make it myself!

As it turns out, it’s incredibly easy to make it at home. Plus, you can choose your ingredients so you know exactly what’s in your crème frâiche.

I’m kicking myself for going all these years in the US without crème fraîche!

You can use sour cream instead of crème fraîche but do note that sour cream is more sour, it doesn’t have the same flavor, and the texture is a little different – it’s not as thick or rich.

You can also use Greek yogurt, but again, it doesn’t have the same flavor as crème fraîche.

So, while you can use these two substitutes, they won’t add the same flavor or texture. If a recipe calls for crème fraîche, I highly recommend using ccrème fraîche

What You Need to Make Crème Fraîche at Home

You only need two ingredients to make crème fraîche at home:

And you only need two pieces of equipment:

How to Make Homemade Crème Fraîche

I have hard time saying this is my crème fraîche recipe because it’s just so simple!

The first step is to pour the heavy cream into a jar or small bowl.

Then add 2-3 tablespoons of buttermilk.

Finally, stir to combine the cream and buttermilk.

Note – I used organic pasteurized cream (not the ultra pasteurized kind) and found that 3 tablespoons buttermilk worked better than 2.

The first time I made crème fraîche I only used 2 tablespoons and it didn’t thicken up enough.

Cover the jar loosely with cheese cloth or a clean tea towel and leave the jar on the counter in a warm room for 12-36 hours.

Once the crème fraîche has thickened, put a lid on the jar and let it chill in the fridge (it will thicken up a little more as it chills).

I left my jar of crème fraîche next to my stove for a couple hours, then set the jar on the warm stovetop after I’d used the oven.

Doing so seemed to help speed up the process a bit compared to the first time I made crème fraîche, when I just left it on the counter.

The warmer your kitchen, the faster your crème fraîche will thicken up.

I checked my crème fraîche every 6-12 hours. It took more than 24 hours for my crème fraîche to thicken, so don’t worry if yours is still liquid after several hours. Just keep it in a warm place and let it sit out longer.

One thing to note is that it tends to take longer and come out thinner when I make it in the winter (colder kitchen) than in the summer.

If you’ve never had crème fraîche, I highly recommend making some just to try it. You can use it to make the strawberry crème fraîche mini tarts in my free ebook!

😍 Look What Else You Can Make At Home!

Craving a quick and easy cold treat that’s a step up from vanilla? Try this no churn crème frâiche ice cream made in mini mason jars! It’s delicious eaten right out of the jar or topped with fresh berries. Yum!

What is crème fraîche similar to?

It’s similar to sour cream in that they’re both made with cream and have a similar texture. crème fraîche however, is thicker, has more fat, and isn’t as sour as sour cream. crème fraîche has a distinct flavor that complements many sweet and savory dishes. You can simply add some to salted noodles and the crème fraîche will make the dish flavorful and delightful!

Is Greek yogurt a good substitute for crème fraîche?

What about mascarpone? Can that work as a substitute for crème fraîche?

Maybe. Mascarpone (which you can also make from scratch) is somewhat similar in texture, though it could be thicker, but has a different flavor. Mascarpone is actually a cheese, which crème fraîche is not. If creaminess and texture is what you’re after, and the crème fraîche flavor isn’t important, you might be able to sub mascarpone for crème fraîche.

[…] Netherlands) I was super excited to try authentic Icelandic skyr yogurt. I love yogurt, quark, and creme fraiche, and I was pretty sure I’d swoon over real skyr…and I was […]

Maybe the reason why your Creme Fraiche isn't as thick as the store-bought it because you did not use "cultured" buttermilk. You cannot use uncultured buttermilk, it will not work because it does not contain live bacteria that ferments and thickens the mixture. If you are unable to find cultured buttermilk, you may substitute the same amount of sourcream to the heavy cream to make Creme Fraiche. The "cultured bacteria" that ferments the heavy cream is the most important part.

Cultured buttermilk has been difficult to find where I live. Thanks for the idea to give sour cream a try!

[…] all sorts of new and delicious things – Icelandic Skyr, cultured European butter, quark, creme fraiche, dulce de leche, and 10+ different types of mini tarts for my new ebook (which you can download for […]